Make Do And Mend.

I have always been quite happy to have a go and mending and recycling as you will have seen in my last post.  At the end of last week I decided to have a go at doing something about a pair of trousers that have been on my mend pile for a little while.  The problem with them is that they were accidentally put through the tumble drier and had shrunk, not very much but enough for me to no longer feel comfortable wearing them because of the length.

I decided to have a go at doing a crochet border around the bottoms of the legs.  I have never done anything like this before and so was just winging it really.  I had some lovely Lydia yarn that I purchased when we were in Florida earlier this year that took my fancy to use for this project.

I forgot to take a picture before I started but when I did remember I took this one - you will have to excuse the state of the trousers, they had been rather screwed up! 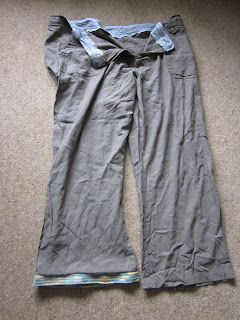 I started to crochet using the bottom hem seam holding the trousers upside down.  I worked one leg completed before starting on the next in the hope of being able to find the best way to do it!

After this I cut off the approximately 1"hem that was underneath the crochet. 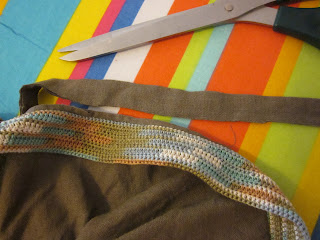 I then using a very small zig zag stitch on my machine, stitched the remainder of the hem left on the trousers and also the rough edge on the piece that I had cut off. 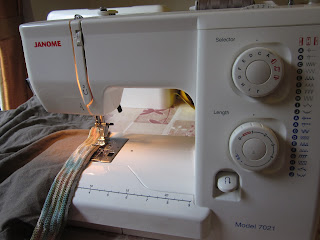 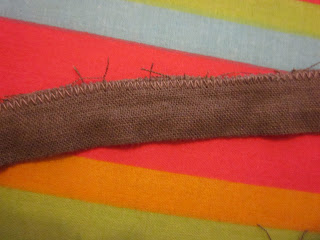 The next bit was the most tricky as I then needed to stitch the piece of hem that had been cut off back onto the new bit of crochet. 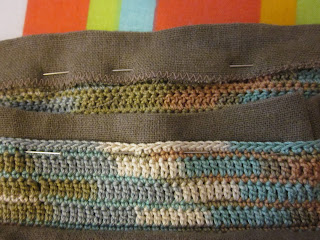 I am usually far to lazy to pin anything, however this was tricky enough that I really did not want to mess it up.  I wanted to be able to stitch on the crochet so that I could keep the stitches as hidden as possible.  Once I had ironed after stitching, it was looking pretty good.  This is the wrong side. 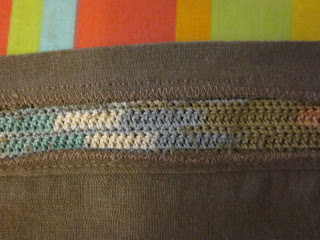 And this is the right side. 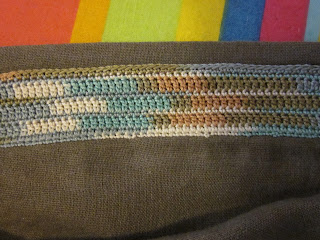 I haven't worn the finished item yet, but am really pleased I have got any extra inch to the length and am very much looking forward to wearing them out. 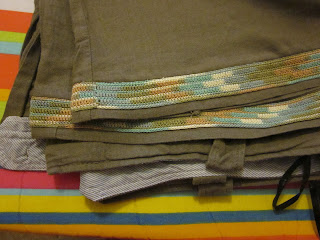 I have only a little yarn left and so am now using this up making some little hearts which I am hoping to put onto a tee-shirt some time :o) x.