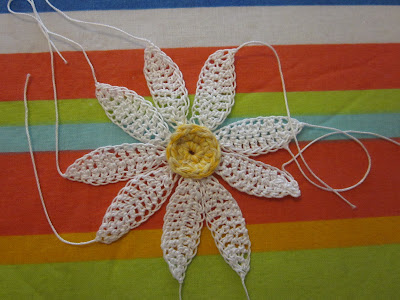 This week I have once again been doing a bit of repairing t-shirts by adding motifs to them.  My white t-shirt had a hole in the corner of the shoulder as you can see below, so I starting making some daisy petals, I have discovered that the ideal crochet partners for my hands are very lightweight (no.10) cotton yarn with large hooks, for this I used a 3.25mm.  I love the dainty lacy effect that it gives.  I got the pattern from here it is a sunflower pattern which I used on a broach on my first blog post on here. I just adapted it to a centre size that I was happy with.  The bright yellow yarn I had was some double knitting cotton, however I think they end up looking okay together.  I made three flowers in total. 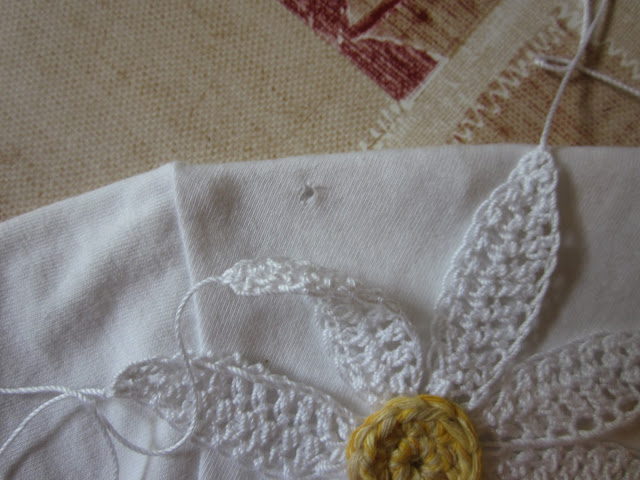 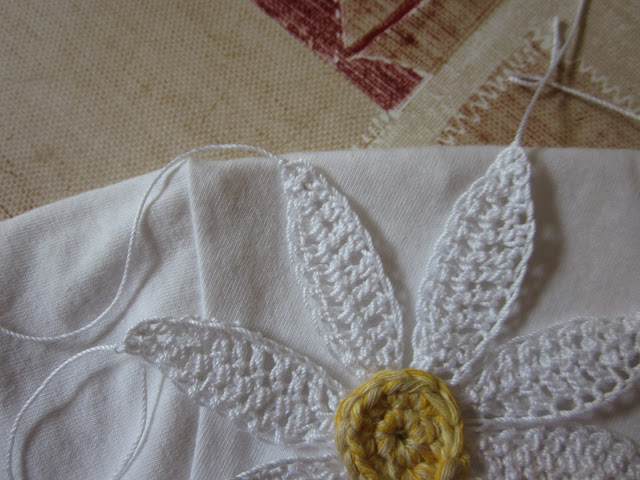 Once the flowers were complete, after ironing them I placed them onto the t-shirt and pinned them in place.  I had to pinch my daughters pins as I don't own any with the nice round ends that you need for this sort of work!  She was quite impressed that she had something that I didn't have. 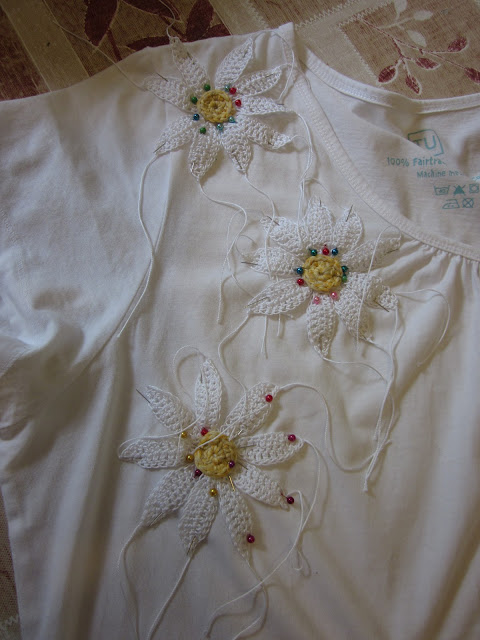 After first sewing down the middle of each petal using the ends that you can see on the picture, I then used a fine cotton thread and did a large back stitch around each petal.  I am really pleased with the outcome and have even worn it out already this week. 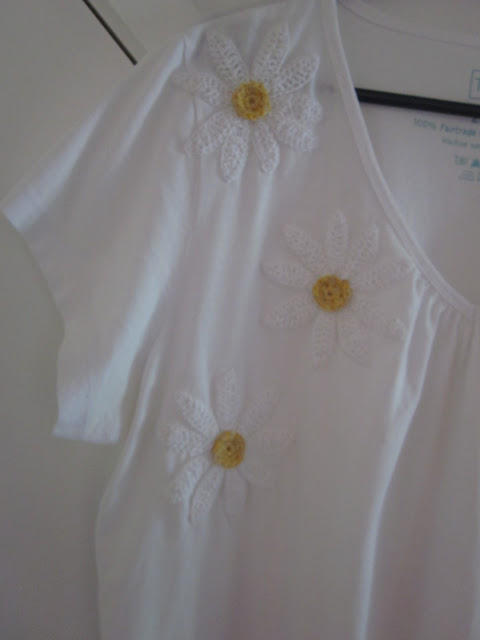 Now the next project was my blue t-shirt, for some reason the picture has loaded upside down - but I think you can see what the problem is with this one - how on earth I managed to get grease stains all the way down the front I have no idea, I must have been doing some very messy cooking! 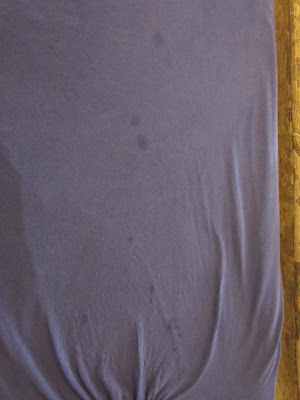 So with this much to cover I was going to need something big.  After a little while on googling and looking at images of crochet motifs for t-shirts I saw this one. It is actually printed, however I thought if I used a large hook (5mm) then this would give me a lacy pattern which would cover the stains but not make the motif too heavy for the t-shirt.  I am so pleased with how it came out. 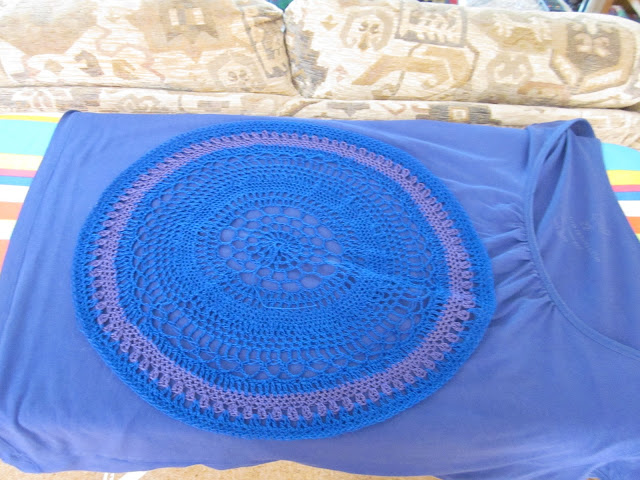 I do have a confession to make though.  I was being a little lazy and decided it would be a good idea to try and use bond a web to stick in on rather than sew it all.  Big mistake,  I am now still in the process of getting all the glue off the t-shirt from the holes particularly in the middle of the motif - doh!  I did still go round and have stiched the outside edge, around the middle section and around the middle section to make sure no other catastrophe occurs with it.

Another little project I have worked on this week are these: 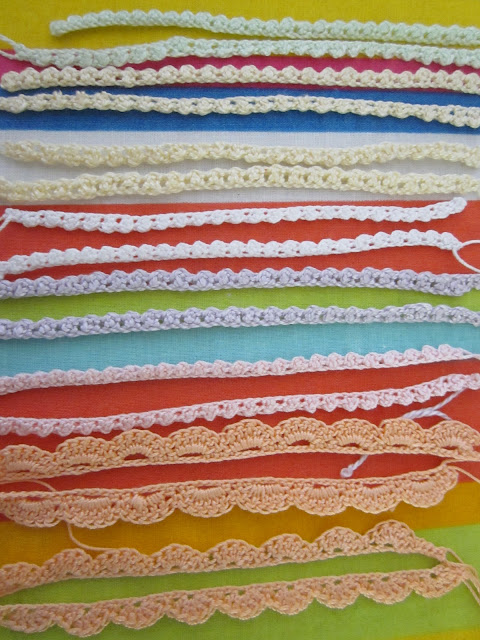 I have been playing with borders, trying to find one that suited a project that I have had the material for, for quite some time, I plumped for a nice simple one which consisted of the chain row and a a stitched row and this is the one that the pink, white, yellow and green strips are made from.  This is what I then used them for: 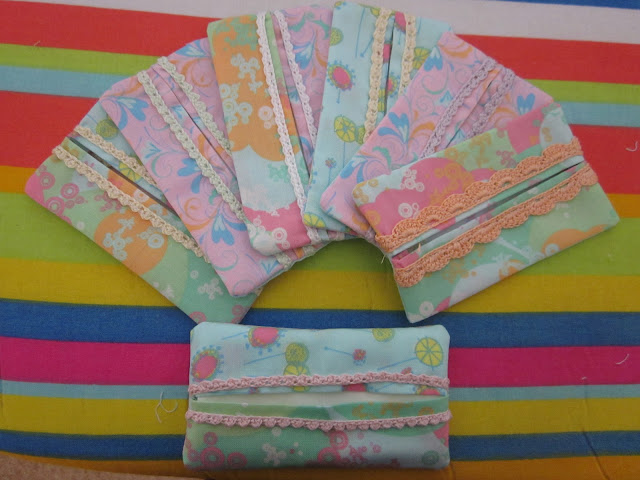 Pocket tissue holders, once they are all filled with tissues, I think they will make rather nice teachers presents and I may add some for my car boot sale stash that I am slowly accruing.

I nearly forgot my dear 11 year old wanted me to add a picture of a project she completed by herself this week - a cute little cat she knitted: 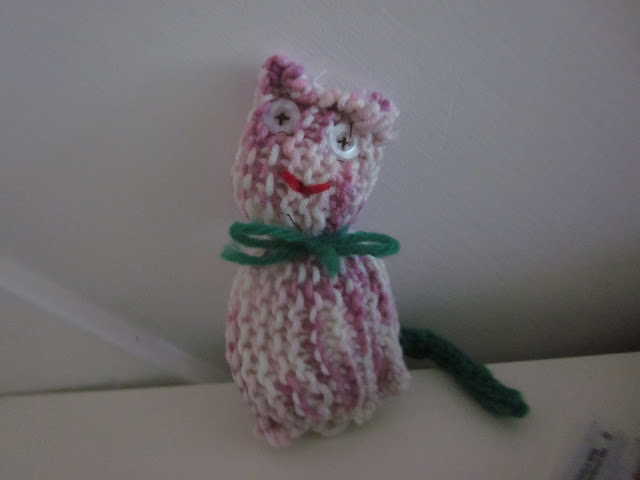