If you haven't yet caught up on posts one and two of this trilogy then you can fine one here and two here.

So I had a week to get everything finished.  There was still a train and veil to complete.  We had a problem with the train, it looked lovely when Jem stood still in it, but when she moved (as she would down the aisle) then it tended to all bunch up in the middle.  A solution needed to be found, so a bit of trawling through blog posts and google pictures ensued. 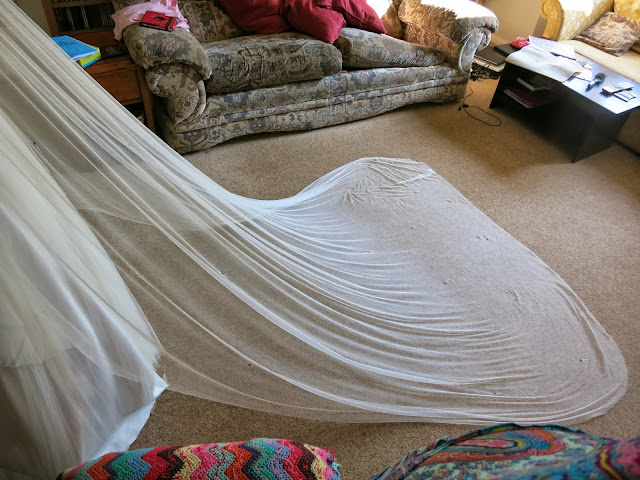 I managed to find just what I needed - a way to stiffen the edge using a plastic wire (like fishing line).  I even found a picture of how to thread it on!  This is my version of that...... 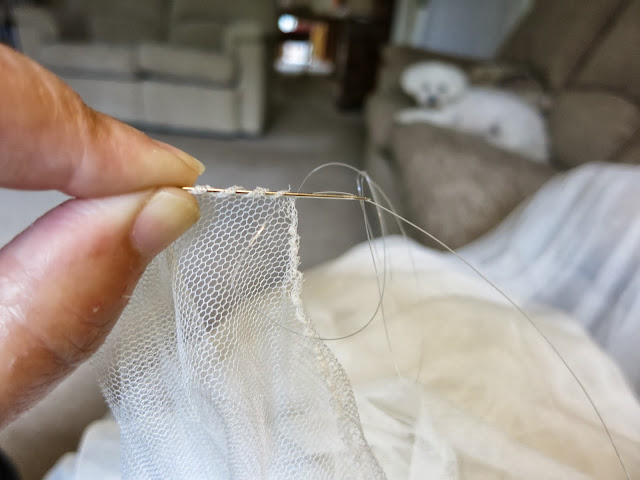 I checked out that the bride was going to be happy with the slightly curly edge that it gave..... 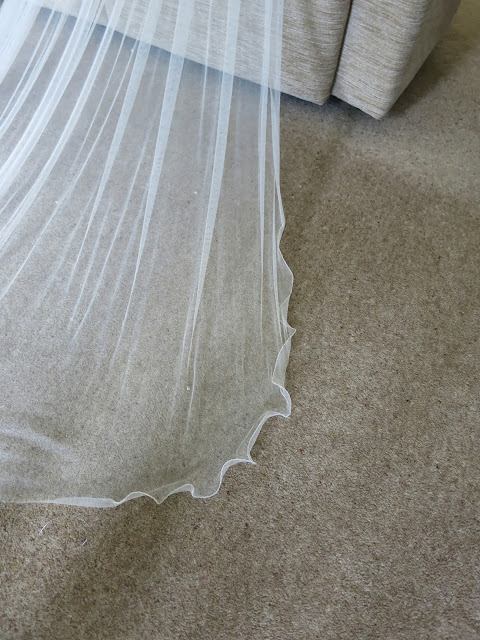 which thankfully she loved!

I ended up repeating the procedure over again so that it had just a little more strength in it.  This didn't solve the problem completely but it was much better.  I was then able to put a small band (made from the tulle) to form a neat edge over the gathered top which then press studded onto the dress at the side seams.  I had been wondering all along where I might get a little bit of my signature (crochet) into the dress and here the opportunity shone out.  The train needed to have just a little support on the back seam, so I managed to crochet (using the sewing thread I had used on the dress and a fine 1mm crochet hook) a small button loop
like so...... 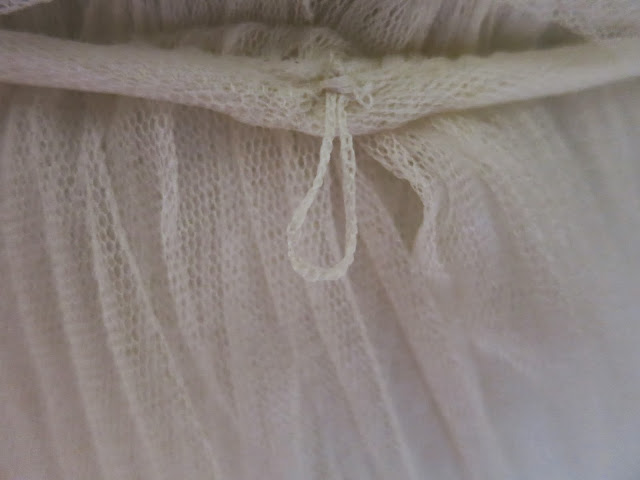 The veil was simple to do, it was scattered with crystals and a small hair comb inserted in the middle.  Jem had still not decided whether she would be wearing the veil over her face or not as she came into the church.  With this design she had the choice of how the hairdresser put it in and how she used it.  She was having a session with the hair dresser the weekend before the wedding so I knew she would have the veil by then to practise with then.

So that was it.  The final try on was a success - all the angst about whether the hem would be right or not disappeared.  What's more on the evening she came to collect the dress Jem was doing a concert just 5 minutes from our house.  So we had a really jolly time trying on the dress, having some lovely food together and then getting to watch her sing - just perfect. 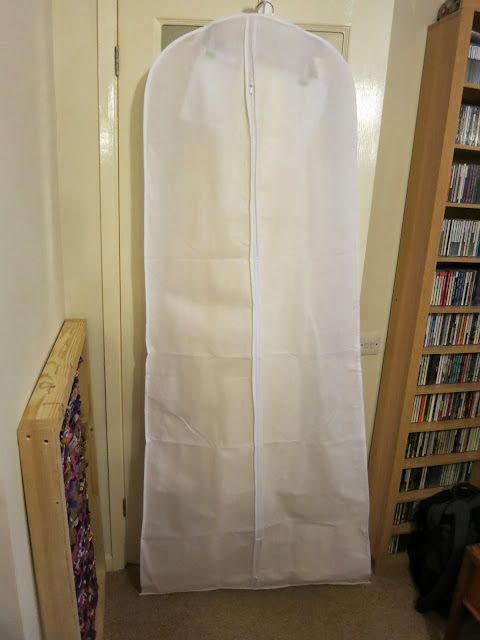 Now you didn't think I was going to leave you hanging on there not seeing the dress on the bride did you?  I got a message the day before the wedding saying that that the bride and her father were going to be doing something a little different as they came up the aisle so she would be holding the train until she got to the top of the aisle.  I had known this might happen so was not fazed at all.

And then the day arrived.  I had made my own jewellery for the event and bag 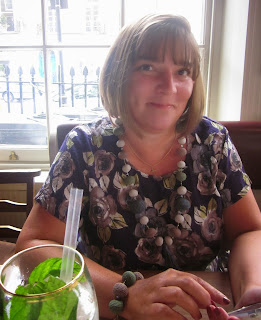 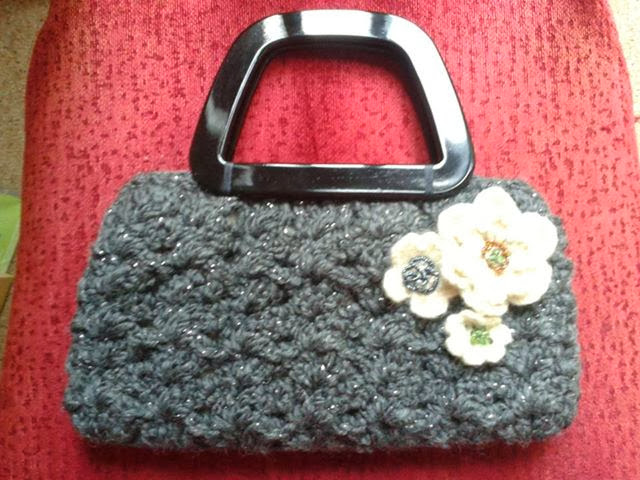 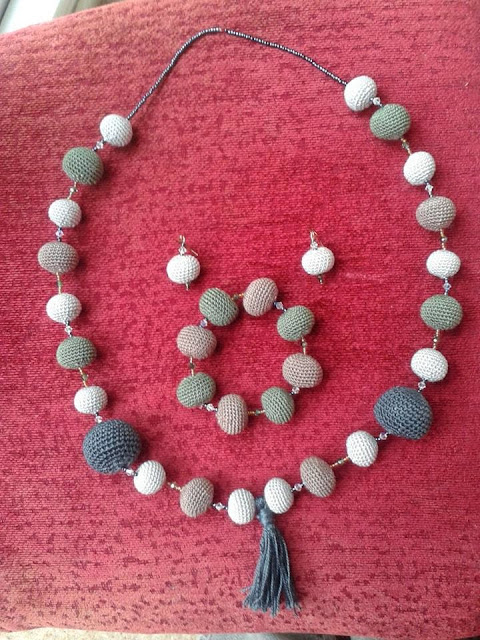 I had been to the church before so it was very easy to find even in the centre of London!  When we walked in, it looked beautiful. 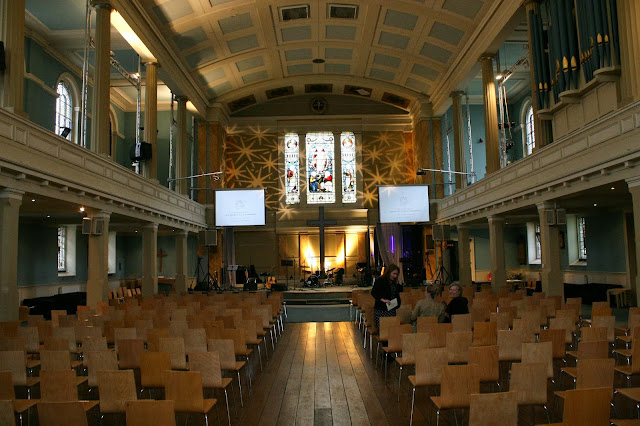 So simple but so elegant.

We even had our names on chairs to sit right at the front behind the brides parents and bridesmaids. 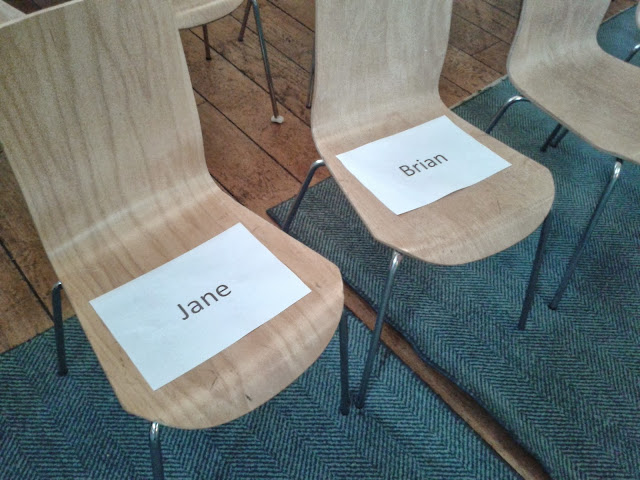 - would you like to have a peak at how they came in? 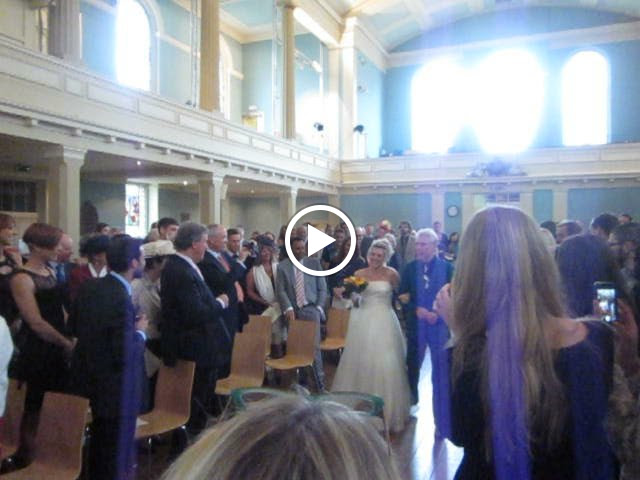 This joyful beginning was just the start to the most amazing joy filled event I think I have ever attended.  Jem even got up to sing the start of the song 'O Happy Day' in the style of Sister Act!

It was lovely to see her so comfortable in the dress, the train was long enough to wrap around her arm so that she didn't even have to hold onto it!  Which was very handy for hugging people afterwards 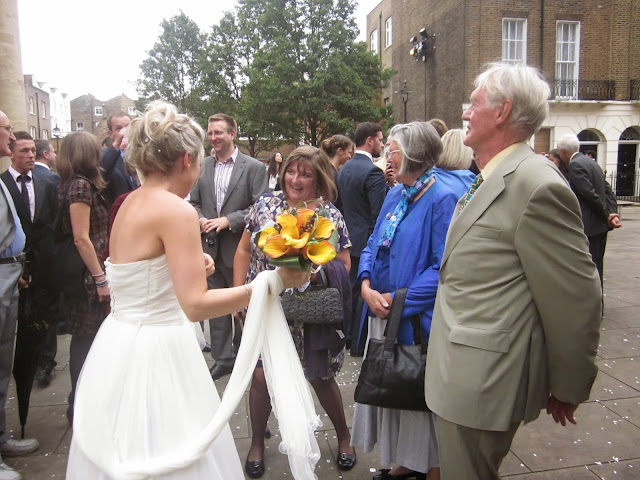 At the reception the train came off and a full scale party  got well underway. 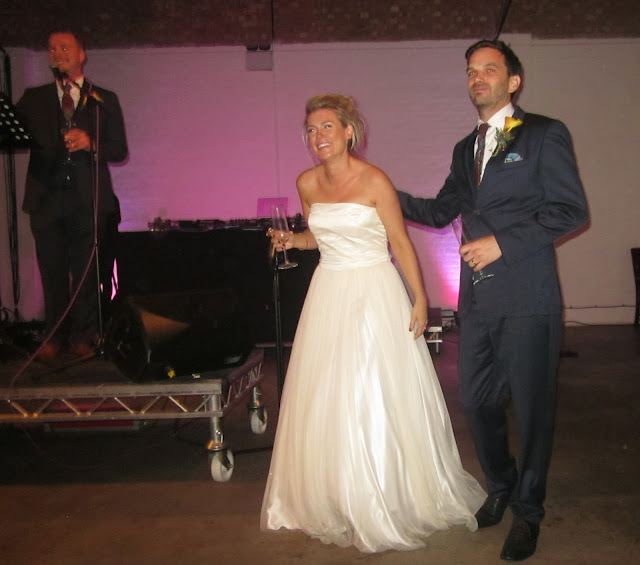 I had known all along that this little rock chick was going to need a dress that could stand up to the party and I was very relieved to see that it did, even after hours of dancing like this...... 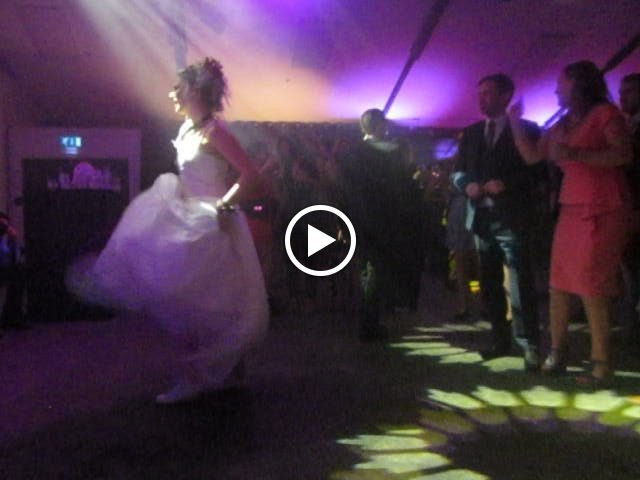 So, it was all over.  The dress did her job well.  and the most rewarding part for me?  As much as it was lovely to overhear people admiring the dress the best bit by far was seeing Jem looking sooooo comfortable in it.  This was definitely now HER dress not mine.