I have been having lots of fun catching up with all the orders that I took back at the craft fair in October.  I haven't been able to hook quite as quickly or for as long as normal as my hands have not been working very well, but they have still been kept very busy.

To start there were poppies to make from fairly traded organic cotton, I charged £4.50 for these with all proceeds going straight the the Royal British Legion. 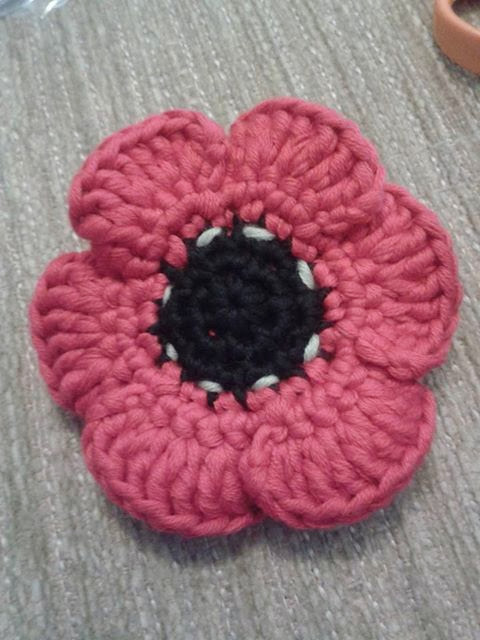 Then there was a certain little boy who was about to turn one.  His brother wanted to give him a teddy like he had been given by his mummy.  He chose the colour red and so red Ted was made, along with an orange one too 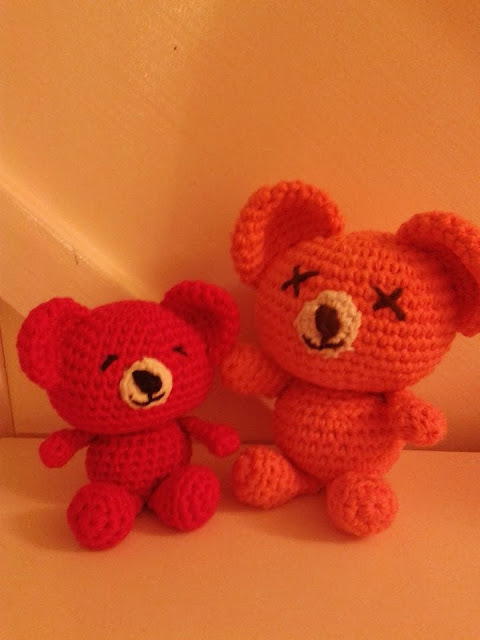 You can see from the picture below he was very happy to receive it!  What was very sweet is that I told the older brother that he needed to make sure his ted spent some time with red Ted before the birthday so that red Ted could be told how to be a good teddy.  His mum reported back to me that he had taken this VERY seriously........so cute!!!! 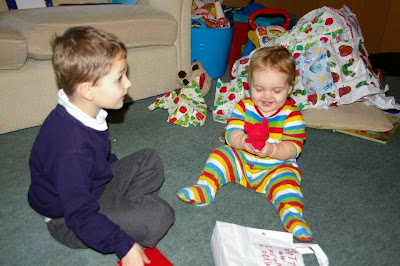 Next there was dressing up day for children in need at my daughter school.  She had decided she wanted to go as piglet, I thought some felt piglet ears might be good enough - but no she wanted them done in crochet! 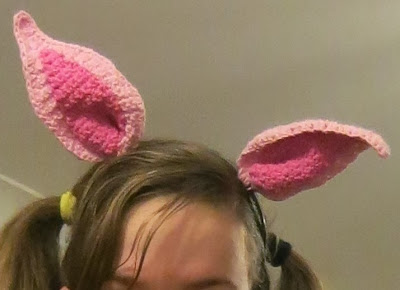 Here is the whole outfit - I only had to purchase the trousers (which she needed some more of anyway)!

We had a new baby arrive at church and I went round to see it at just a few days old with a little hat as a gift.  She was soooo tiny, just 6 lbs 8 oz's, the smallest babe I have seen for quite some years.  I had been talking to her mum just a week before and telling her about baby cocoons that I had seen on Pinterest, saying I hadn't made any as didn't know anyone that might use one.  Well, when I saw this little babe who wanted to be held very tightly in a little ball, whose startle reflex took hold every time you moved her, making her cry - I suggested a cocoon might just help.  So I went home and learnt how to spiral in treble crochet :o). 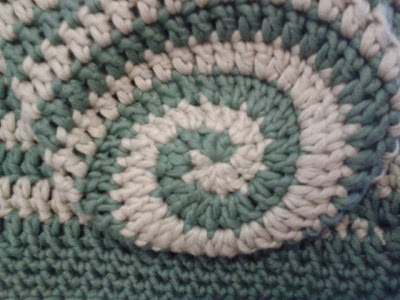 I made the pattern up as I went along, checking it's size against her to make sure it was going to be tight enough but not too tight. 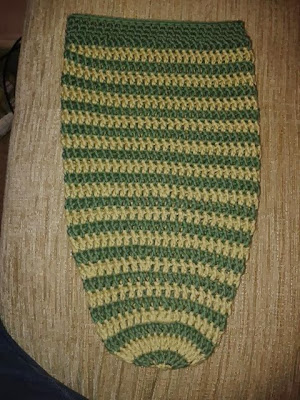 I took it around and it fit just right.  These are the photo's the mum sent me from that first night trying it... 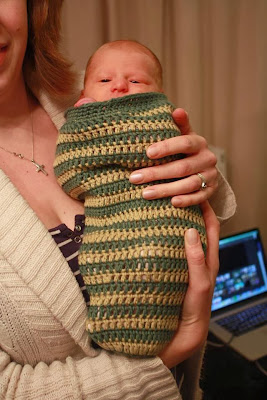 and get ready to ahhhh some more 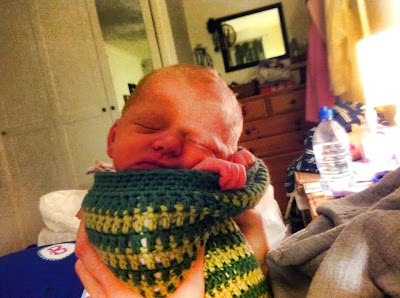 I haven't had chance to get anymore feedback on it's effectiveness, so will have to get on and do that.

Then back to the orders I went.  There is this lovely lilac fairly traded organic cotton hat, wristwarmers and brooch set, charged at £18.00. 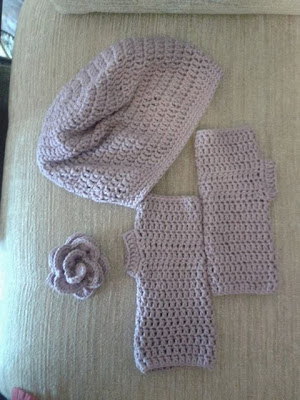 The same lady also asked me to do one of my hexagonal bags in 'Aztec' colours.  This meant that I had to go the yarn shop - such a hardship!!!! 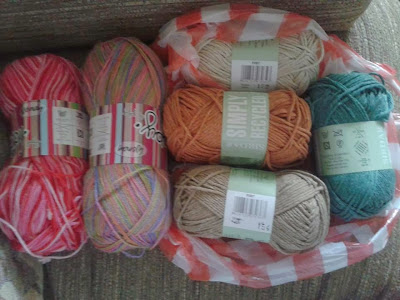 She was happy with the colours I had chosen in recycled cotton and acrylic yarn and played a nice little guessing game with friends on my facebook page to see if they could guess what it was going to be.... 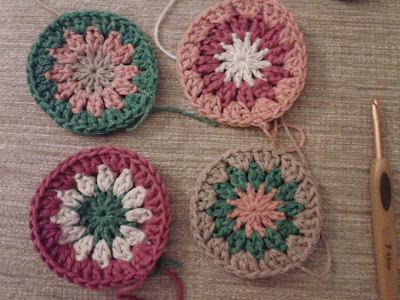 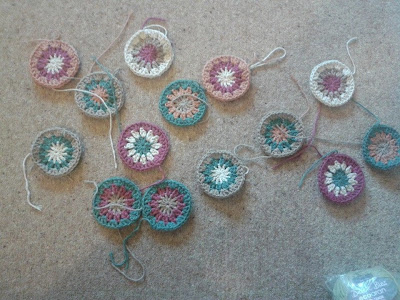 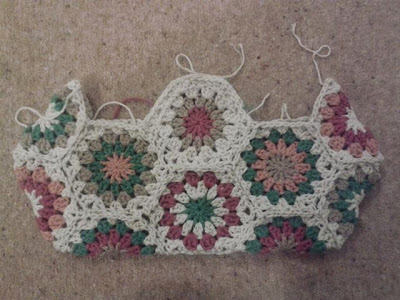 No one got it until this photo!  And here is the finished bag, lined with fairly traded fabric £20.00. 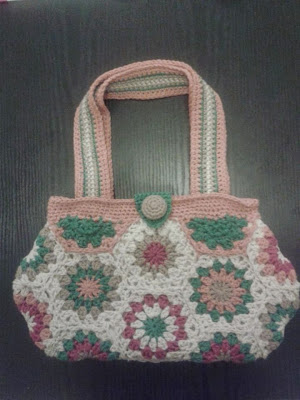 And then there have been lots of hats.  This pink fairly traded cotton slouchy beanie was an order £8.50. 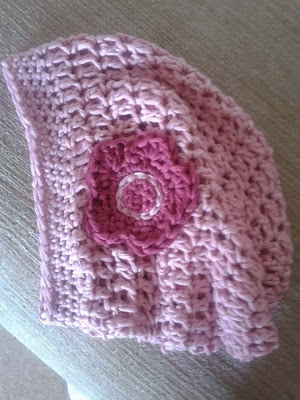 This little fiarly traded organic pixie hat is for a 2 month old baby.  I have been so late getting this to her (2 months too late) that it has taken me three goes to get it the right size.  Hopefully when she finally gets it this week it will be the right size! 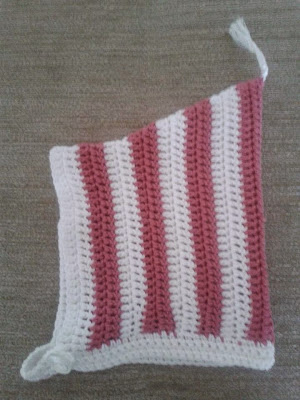 This is another gift I have made from organic cotton I bought in the USA,  for one of my God-children for Christmas.  The first present I have made for myself to give this coming festive event! 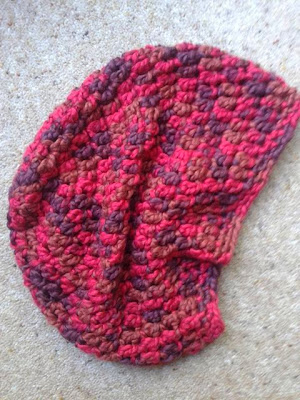 I have made thee santa hats.  Sorry for the horrid turned over picture - for some reason Blogger just won't upload  it  the right way round :o(.  Again all made from fairly traded organic cotton. 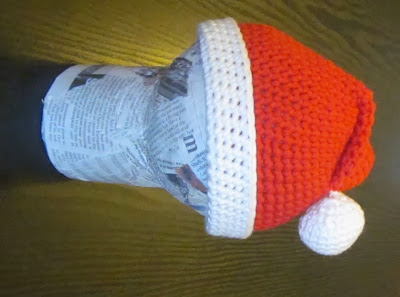 You may have noticed in the new yarn stash that I bought some sock yarn.  This is something I have never tried using before but have had the urge to try.  It is bamboo and nylon yarn (as environmentally friendly I could get without using wool, which brings me out in a rash).  I decided to have a little play first 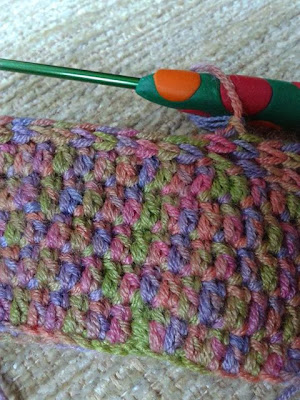 This was using a 2mm hook which was just not quite right, so I have undone it and started again making up my own sock pattern as I go along using a 3.25mm hook.  I will show a progress picture when I have done some more.  Hopefully I will also remember to write down how I am doing it so that I might get two socks that look roughly the same!

Apart from crochet, Christmas cards have been on my mind.  I don't think we sent many last year - I can't even remember whether I made them.  I have been making my own cards, (of all varieties) since my children were very small.  It was then I realised that I did not like buying them to line the pockets of huge card companies.  I couldn't afford to purchase the more individual hand made ones that I occasionally saw so I started making my own.  But over the last few years we have had lots of traumatic happenings in the months before Christmas and so card making has gone a little off.  This year though I feel ready to get back in the saddle with them.  Firstly I needed to find out what I had in the way of resources.  I don't want to buy lots of new bits if I can use up older stuff first.  However this meant I was going to have to sort through everything - all the stuff that I have been shoving in to the wrong places was going to have to be organised.  It took me about 4 hours (and this is just my card making stuff, I also have, beading, fabric and yarn!).  But I was very pleased with the result 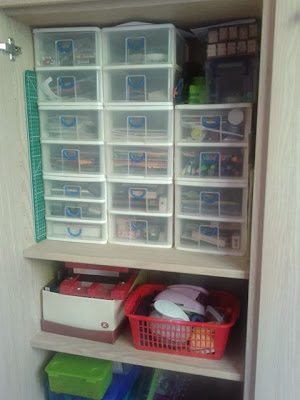 Now hopefully this should mean Christmas cards will be made this year and I shouldn't have to buy ANYTHING!

Another exciting thing I have been doing through November is beginning to teach a lovely lady called Sue, to crochet.  She wouldn't mind me introducing her as a 'mature' knitter, and so far we have had two, hour long lessons.  She found it very difficult to get the hang of how to hold the hook and yarn so I sent her away after the first session to just practise holding and doing a starting chain.  I was absolutely thrilled when she came back today with about 2 metres of beautiful crochet chain stitch!  Hooray, by jove she had jolly well got it.  She had found her own way of holding which was suiting her and so was ready to move on today.

Her reason for wanting to learn is to be able to do granny squares for blankets she makes for charity.  With this in mind I did not want to teach her things that would not directly lead to this end.  So today we concentrated on how to double crochet in squares. 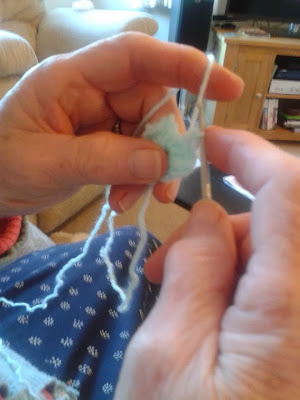 As you can see she got the hang of it really well, and in fact had done 3 rows before it was time for her to go home today.  We have another lesson booked for 2 weeks time - I wonder how big her square might get in that time.  All being well the next lesson will be on treble crochet in squares!

Another thing I finally got round to after the craft fair mentioned earlier - is I FINALLY got my Folksy shop up to date.  This had been very neglected since January and unsurprisingly I had, had very few sales during this time.  I am pleased to say I have had 4 in the last 3 weeks, so that was a job most definitely worth doing.  Do go over and have a look here at what is there. I am hoping that I might get a few more custom orders for Christmas.  However I won't be doing a Christmas fair at home this year as I did last year,  I just don't have enough time to make stuff!!!!!!

And what's next - well - any guesses? 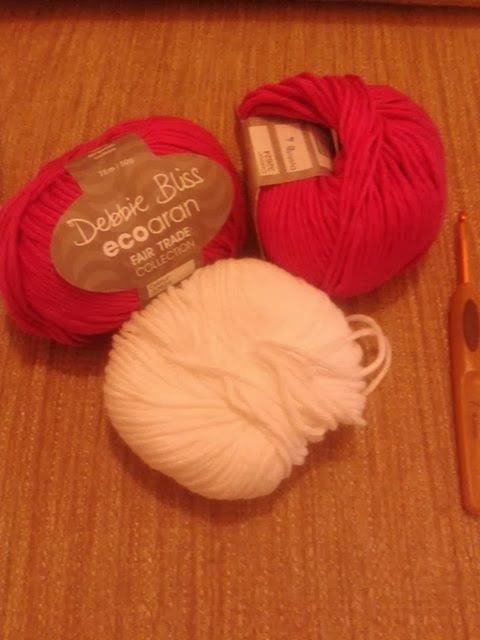